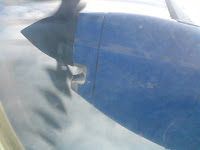 I took my first flight in nine years today. The plane was tiny and propeller driven - I did not even know propeller planes were still used for commercial flights

There are several reasons why I don't fly much. One is that overseas holidays would be no pleasure as I cannot enjoy local food.

I was strapped into the plane when I realised I should worry about my ears. No problem. I breathed deeply during descent and ascent and suffered few problems.

Then there was the coffee. At the first airport, in the departure lounge, one coffee bar could not offer decaf - but a second could. It was not available on the plane -that's very disappointing. At the second airport a colleague bought me a coffee. I'm not sure if he asked clearly for decaf as I think the cappucino was caffeinated. Difficult to say as I had been unable to get any kind of coffee all day. Certainly there was some swelling of the tongue and hoarseness in my throat. Not a good idea during flying but it probably helped enhance my enjoyment of the flight. Some brilliant views of cloud archipelagoes floating across the mountains of the north.

I'm still trying to formulate that poll about decaf coffee. I don't think you could require airlines to carry it - but it would be good customer service.