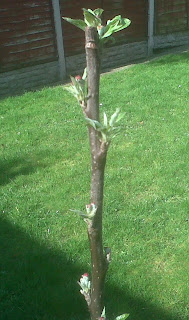 This is our new Golden Delicious apple tree, purchased at minimum cost from Asda.

Blossoms are already emerging and it's currently getting a reasonable amount of sunshine. I've found a slot on the lawn for it and dug it in well. We'll get a picket fence for it - but there will be no more football on the lawn.

Now I have to find a space for a second apple tree, which will be a Downton Pippin or some equally rare yellow apple. Apparently they cross-pollinate. The neighbour has a thriving apple tree so I hope they will help each other along. Must also ensure no one goes round swotting honey bees.

The aim is to cultivate the other, rare kinds of yellow apple. You need Golden Delicious to pollinate them, it seems - so we are starting here. And this way we will find if an apple tree can grow in our garden.

I dug out the last list the dietician gave me - a mere five years ago. It was meant to be more subtly graded than the earlier ones - but resulted in supposedly safe zero salicylate items such as cauliflower, papaya and golden delicious apple being ranked as "low" with items such as mango, pineapple juice, tomato, hazelnuts, peanut butter and horseradish.

I tried pineapple juice a few years ago but gave up rapidly because of the effects.

Somebody gave us a mango so I tried that today. There wasn't much substance to it. it was mainly stone. It had a tangy but insubstantial taste and an unpleasant after-taste. I definitely prefer papaya. I used to like mango juice but I think it would be a bad idea. Also pure mango juice is hard to come by.

Now to see if there are any after-effects.

I went to fetch the list off the kitchen noticeboard to write this - and found it had already come off and was starting to drift around the kitchen. Time I scanned it in - although, regrettably, in spite of the care that went into compiling it I still prefer the original lists which had a greater range of "negligible" items.