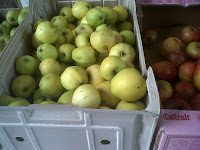 #BAD11 #worldfoodday I'm not sure about the Golden Nobles. They are yellow but I'm not sure they are salicylate free. In fact there's a distinct soreness of my throat and running of my nose after eating foods made from them.

I'm ignoring it. It's a cooking apple. It's yellow and  I should be able to eat it and we've got a stock of them. We've eaten apple crumble and made an apple cake. I added some water to some left over stewed apple and drank it as a juice. Apple juice! I haven't drunk that for some time. It left a funny taste in my mouth but did not choke me - so maybe they are only low salicylate. The two varieties of yellow pippin don't seem to have caused any harm. They are delicious but running out fast.

A new blender seems to have appeared in the house so we're thinking of trying some banana smoothies using Smartprice bananas. However I'm not sure it's a good use of expensive fruit. It took one large Golden Noble to make a glass of apple juice and just a couple of minutes to drink it.

Today bloggers are writing about food for World Food Day and also for Blog Action Day, which focuses on the world's starving. If I seem to moan that there's lots of food I can't eat, don't take it seriously. For millions around the world there's lots of food they can't eat, because they cannot get it. And that includes Smartprice bananas and apples and bread.

The RPAH handbook in Australia list the Red Delicious and Golden Delicious varieties of apples (with the skin removed) as moderate in salicylates. Other varieties are listed as high in salicylates, but the list isn't exhaustive. Most of the salicylates are in the skin, so you should peel them.

My lists have always stated Golden Delicious is fine with the skin on. Trying skin removal with other apples might be worthwhile. You make it a good point. We did of course remove it for stewing the Golden Noble anyway. I was at an Apple Fair the other day and a grower was saying how some of these other varieties are loaded with vitamins etc in comparison with Golden Delicious. That might also indicate high salicylate levels.

Hi there RAS! I almost died from an anaphylactic shock 30 months back. The cause was salicylates. And for these 30 months I have not eaten any 'outside food'. I have been cooking and baking and making all my food from scratch. If I want a pie, I make even the pastry from scratch. If I want to eat a cake, I bake it from scratch. Anything with preservatives, colourings, flavourings, additives, MSG will trigger an attack. I am even get a severe allergy reaction from Panadol!

Here is my story of how I met death, lived and am fighting to live my life to its fullest though I have set backs caused by this medical condition:

Evelyn, I've commented on your blog. Just to say I know how utterly life-changing it is. I've not given up on getting this recognised by the catering industry as I have to eat their food sometimes.