As luck would have it, I was due to go to a Chinese buffet meal last night. As I've said before a cold should be a cause for partying, not for misery - as it was over the weekend.

I had some sandwiches at lunchtime yesterday and they were quite spicy. I'd love to say that last night I really indulged - but habits are hard to break. What happened was I didn't worry about what I was eating. I chose essentially low salicylate food - plain meat, so-called crab feet, chicken and sweet-corn soup, egg fried rice and banana fritter. And cheese cake, sweet, plain cheese cake. 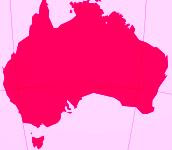 In the last stages of a cold it's difficult to know, yet again, whether breaking the diet is going to aggravate the runny nose and sore throat. Today I'm still feeling a little sneezy and tired but it's mainly gone. My left eye has been sore, on and off, over the weekend. So is that the cold causing sinusitis - or sinusitis caused by attempts to get rid of the cold by drinking redbush tea.

The Splodge, which was The Ring, has been looking like Australia for a couple of weeks, almost so that I could uncover in the summer and pretend it was a tattoo of down under. Alarmingly over the weekend it seemed to darken in the area of New South Wales.

Today it's very faint, in spite of last night's excesses. In the back of my mind, I've been wondering whether the cold meant the allergic problems are going away - or even that the virus itself might solve them. If that happened, I wouldn't be able to write so much on this blog. But I'd be able to enjoy my summer holidays.

Is your map of Australia really round that way? It's very much back to front...;-)

Possum, that's the way it was!